skip to main | skip to sidebar

Careful Lyle, It's a trap. 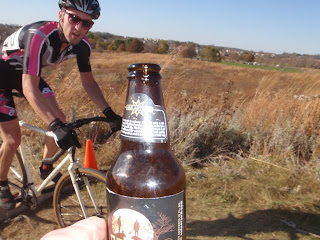 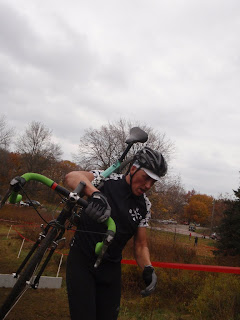 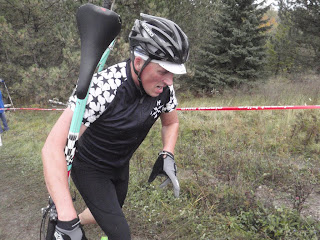 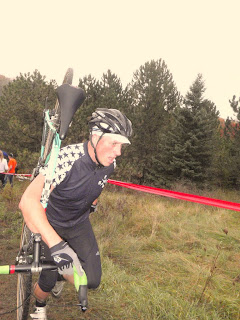 photos by Djonny Mac
dumped from my mind at 6:53 PM No comments:

I've been a bit distracted with the loss of the Jetta on the way home from last week's race. Dealing with the insurance company, talking to the VW dealer and reflecting about how wonderful an airbag is on my daughter's side of the car.

Being down to one car isn't so bad. I rolled the Tanknium out of the hanger and have been riding it to get to work. It's been refreshing with Fall settling in. Coffee in one hand, handlebar in the other, surrounded by darkness and streetlights.

But there is racing to report. DJonny Mac took a good shot of me clearing the log obstacle at Badger Prairie last week. 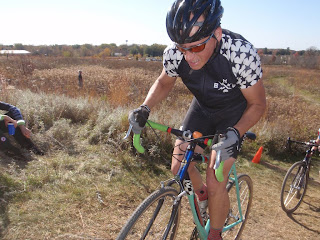 So far I've been fairly consistent. Last or nearly last at each race. At BP I was feeling solid and was able to keep the others in the race in sight. Still, I was last.
Yesterday at Kletzsch Park in Milwaukee was more of the same but without a flicker of light at the end of the Pain Cave. The run-up was a bitch. I doubt it was ridable without the barrier placed at the bottom since even the few P1,2's who didn't travel to Louisville for the USGP weren't riding it. I had a good lap and a half in the beginning. I was firmly lodged in 5th (of 11) but the second time up the run-up I was done. I decided to use the rest of it as a training day and stayed aerobic and upright.

Today was a different day and a course I know. While most of the races I've done there have been dry and fast, there was a steady rain last night. The course was fairly soupy with a mud that stuck just enough to be like riding on a trainer while making corners like an icy sidewalk. The first lap was fast if you had the ability to see the line and have the power to use it. I was on the tail end of the lead group at half a lap and then the course came out into the park where there was no clear line. Everyone slipped around. Greg disappeared off the front as usually. I wasn't mentally keeping track of who had passed me but I thought I was near the top 5 again. I settled in to a nearly anaerobic rhythm but I had company for a change. I traded positions a few times with him during the laps. I had a hundred meters or so on him with a lap to go but I was gassed. With half a lap to go the front wheel slipped out and he caught up. I tried to find any extra watts but I finished behind him for 8th (of 11). I was well ahead of the guys I usually ride with so I'd have to say I enjoyed the mud. 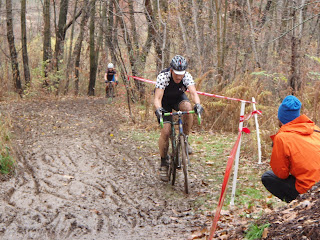 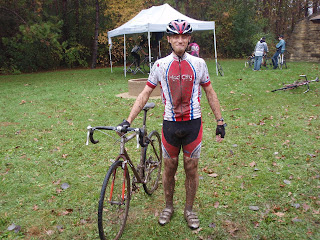 I didn't look as peppy afterwards. 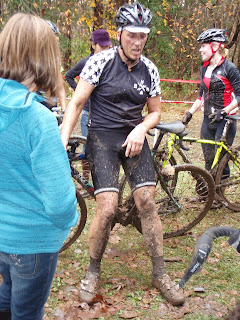 But I kept it Metal. 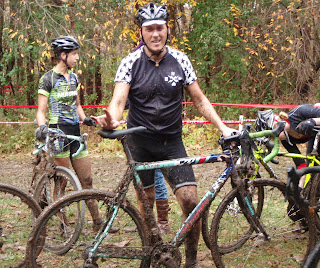 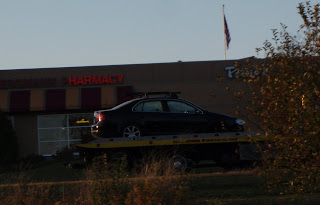 Badger 'Cross (aka Furthermore 'cross) went better than expected. Despite riding with less intensity and for less distance than in weeks past I felt like my shit was together. Last week's "on the money" quote went to Mike Curtes with "Dude! You're not going for a coffee! GO!!!" That came with 2 laps to go but it came well under the wire.

This week I rode out to Badger Prairie on Thursday for a 45 minute ride with a QBP employee (Lisa) on her sweet All City, her BF (who works at Trek), and a few other ladies and Neil Swanson's lovely wife (while Neil took care of the kids at the playground, Georgia is an absolute doll). it was a nice 3 hour ride with trail time, but I wondered if it was too little too late.

Today was windy as hell. The BP course is a know quantity no matter the direction and I actually liked the course, even if it was nearly as bumpy as a jackhammer. The one spot where I ruled was the back side run up over the 6x6 railroad ties. Rather than dismounting each time I rode it. Momentum and the correct gearing (not full granny gear) allowed me to gain ground or keep ahead of the few guys around me. I could see the guys ahead of me even if I wasn't banging elbows. Paul Warlovski was just ahead and I thought, even if for a fantastic moment, that I could reel him in. It wasn't to be but I stayed on the nose of my saddle each lap and didn't crash.

...until the drive home. I've dealt with getting cut off on a bike too many times or ways over the years, but today I had Persephone in the car and it was different. Side airbags deployed and there was noise. We're fine, but I definitely didn't like it. I'll continue to ride the bike to work, but I'll need to carpool to Kletch Park for Saturday's race. Really, Sephie's fine, I check every 10 seconds. Oh, and the Axis was hanging upside down from the rack when we came to a stop. I'll check it tomorrow. But Sephie's fine. 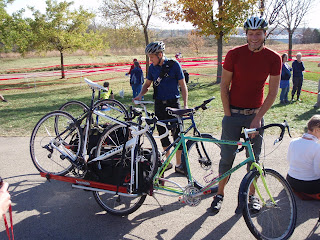 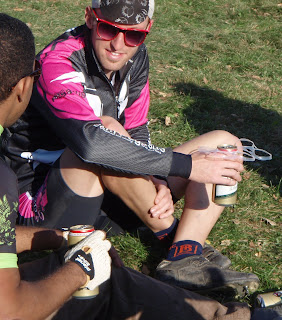 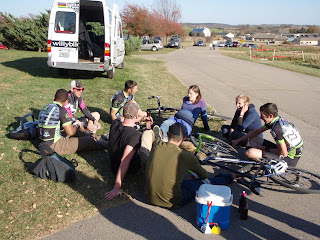 I see these guys at the races. They have big money cameras, hat on backwards, blinding flashes on sunny days while I'm trying not to target fixate away from the line. But then there's the Superfans with their iPhones or small pocket cameras taking as good or better shots. But they're yelling at you while ringing a bell or holding a beer at the same time. They post them up on The Facebook or in Flicker and they don't want a dime. I can understand a guy wanting to make a buck, but if that's the case, the shot should have more than just a racer in it. There should be pain, suffering, joy or at least grit in teeth and a drop of sweat visible. 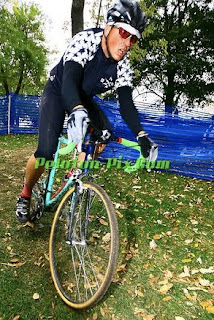 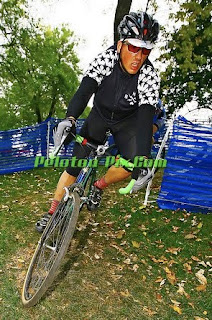 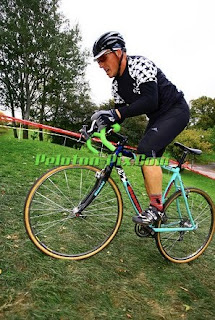 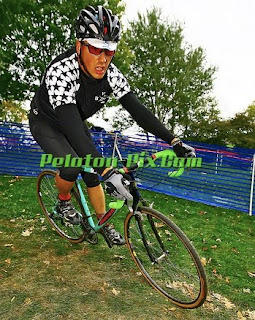 This is a must read... http://slonie.wordpress.com/2010/10/04/cx-comic/
Saturday was 'Cross the Domes in MKE. I raced hard, nearly puked, didn't crash and didn't finish last. Lucky 13th but nearly 11th if I'd gotten off my ass and pinned it. My brain was so addled after the race I forgot my spare wheels in the pit.
This weekend is the Grafton 'Cross . I hope not to suck again.
dumped from my mind at 10:02 PM No comments:

Preventive Maintenance on good tubulars is a bit of a PITA. They both were the darker color before the races this weekend but the rear got a workout on the drive side and the silk is latex free. All 300 threads per inch. 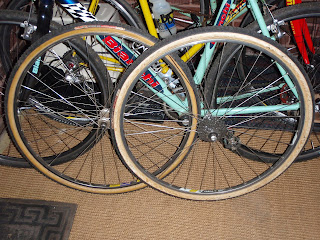 So I got out the necessary tools... 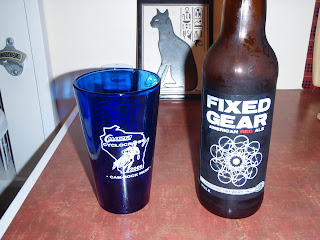 I hope I don't switch fluids tonight or I see a visit to the ER in my future. I wonder if Stan's plugs ulcers? 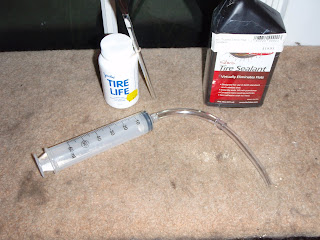 So I did some racing to wear off that latex on the sidewalls. The circus that is the USGP of Cyclocross was in town. I did the Master's 45+ 1,2,3 both days. I procrastinated the registration until Saturday morning so I was positioned at the back of the field at the start. I'd like to think I would have been closer to the teens or 20's in the results had I registered earlier, but the best I could muster was 43rd (started 58th) on Saturday. I was back a bit further Sunday. Saturday I felt great. I had no problems jumping on it out of the corners and the straights were done too quickly. Another racer commented to me in the pits "what pressure were you running in your tires, 100 psi? I couldn't stay with you on the flats." That definitely made the 49 minutes of suffering worth it. I had a plan after the first lap, stay on the gas on the straights and don't get brave in the technical sections or do something stupid. I stuck to the plan until less than half a lap to go. I'd made a pass after the pit area and had at least 15 yards on him as I headed into the U-turn on the grassy off-camber area. I also had too much speed and leaned over too far so the front tire let go. It seemed like only a moment, but a Superfan yelled "C'MON 58! YOU GOTTA WANT IT!!" I snapped out of it and hopped on the bike. I didn't get back up to the guy I'd just passed, but I finished.
Yesterday saw some course changes resulting in faster laps. More open area for me to feel faster but less recovery time had an effect. I could hear familiar voices, bells and horns all over the course. Hearing a voice I know is like having a hand on my ass giving me a solid push toward the finish. I know I dig that much deeper for the Superfans even if I'm at the back of the field.
The Axis held up and I'm a bit tender from two crashes. My left foot stayed in the pedal when I went down and I think I lightly sprained my left hip. I could hardly move after the race but I'm better today. It's a bit tender climbing off the ladders at work, and I barely feel it riding. I'll take it easy this week with the run-up practice, but The Race at the Domes is on the schedule. I'll be ready.
dumped from my mind at 9:27 PM No comments: 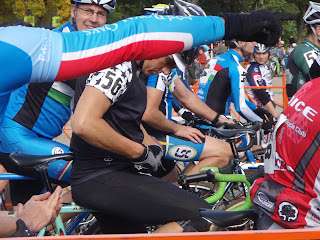 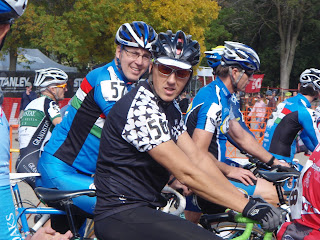 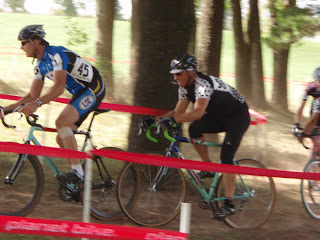 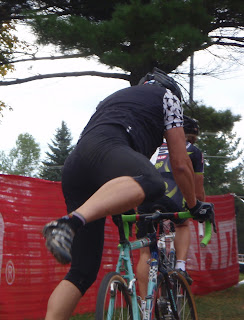 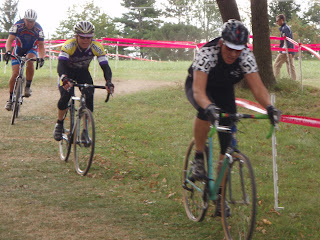 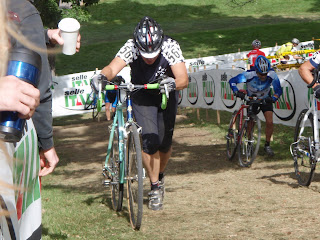 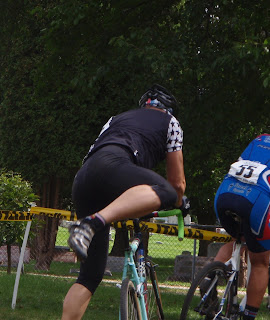 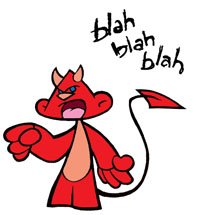 if you need more amusement...

Tim
Old road racers don't stop, they just get on single speeds... and drink coffee. Lots of coffee and breves. To avoid expensive therapy and to work on my creative writing, I'll be posting various thoughts here.